I have mentioned Michael before, and during the same trip he taught me Avocado Grapefruit Salad, he made his famed chard cakes. I was craving them yesterday, so I requested his recipe which he graciously supplied. 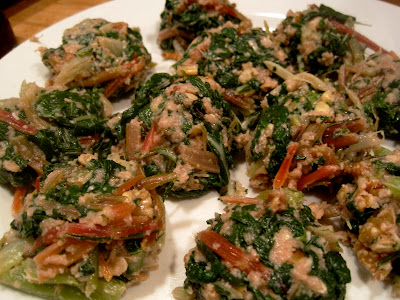 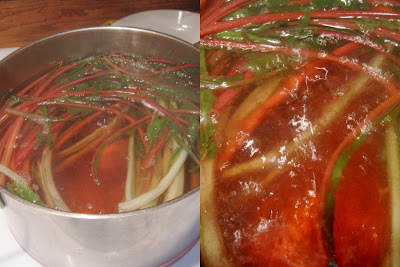 First the stems are lightly boiled (undercook rather than overcook here!), and then the leaves are added in. 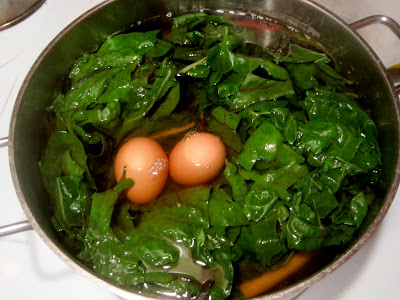 We were making a nicoise salad that night, so some eggs were hard boiled in the water too. It made me think of Baba Yaga and her cooking pot, and the dark forests the frequent Brothers Grimm stories. Is that just me? 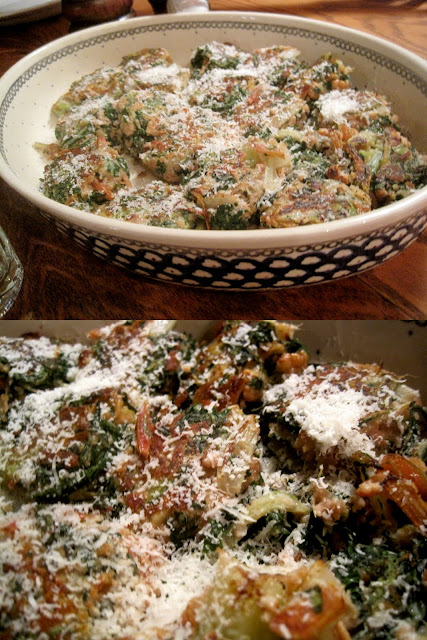 In any event, the chard cakes were delicious. The recipe I'm giving used pine nuts, but I had none, so I substituted walnuts. Pine nuts are even better, so use those if you can.

Cut the stalks from the chard leaves.
Bring a pot of water to boil and add the stalks. Simmer for four minutes.
Then add the leaves, and continue simmering for three minutes.
Drain the chard and allow to cool slightly, then squeeze out as much water as possible.


Chop the leaves and stalks roughly and put in a large bowl.

Add to the bowl all the remaining ingredients (except the oil) and add salt and pepper to taste.
If mixture is gooey, add more bread crumbs.

Shape the chard mixture with your hands into little cakes no more than about 1/2 an inch thick. Pan-fry for about three minutes on each side, or until crispy and brown.

note: these cakes are rather good with--I hate to say it--ketchup, especially as cold elftovers the next day. Mmm, tastes like America.


Posted by Lola Bellybutton at 5:22 PM