Mmm... granola. My family are self-described crunchy-granola-upper-west-siders. And it's true. We're not hippy-dippy (though at times I veer off to that edge), but we do eat a lot of veggie/vegan organic, local farm-grown food, wear tevas, play ultimate frisbee, and go to world music concerts.
And me? Well, I love granola. I don't really eat cereal with milk. Never have; I don't like how it gets soggy. So, minor freak that I am, I eat cereal with yogurt. Especially granola with yogurt. So, yesterday morning, with a hankering for granola and not enough for a bowl in sight, I pulled up a recipe and conjured my first batch.

And also--I love dried apricots. They are a good source of iron as well, which is always good for me as a vegetarian, considering I don't get the iron so prevalent in meat. Personally, I prefer california dried apricots, the tart, chewy kind that has been halved and pressed, to turkish apricots, the sweet, juicy kind that has been kept whole. Either way, it's best to get them unsulfured, which makes it less pretty in color but a lot better for you. 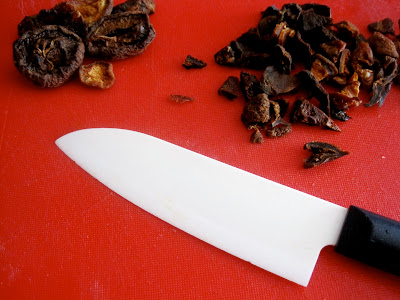 This granola was so good I may just have to make my way to the kitchen right now and make myself a bowl. 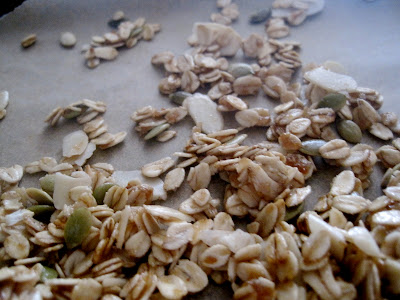 
Preheat the oven to 250°F (120°C). Line two large baking trays with baking paper.
In a large bowl, combine oats, almonds, sugar, pumpkin seeds and cinnamon.
In a small saucepan, heat the oil and honey over medium heat until just simmering, then add vanilla.
Pour the liquid mixture over the oat mixture and thoroughly combine until everything is coated.
Spread the mixture onto the prepared trays.

Bake for approximately 25 minutes, stirring halfway through to ensure even browning. Bake until golden brown. Stir in the apricots and currants as soon as you remove the trays from the oven.
Let cool on the trays (unless you can't help yourself and you need to take some for a warm bowl of fresh granola!).
Posted by Lola Bellybutton at 9:17 AM