I know. The name's a mouthful. A yummy mouthful. 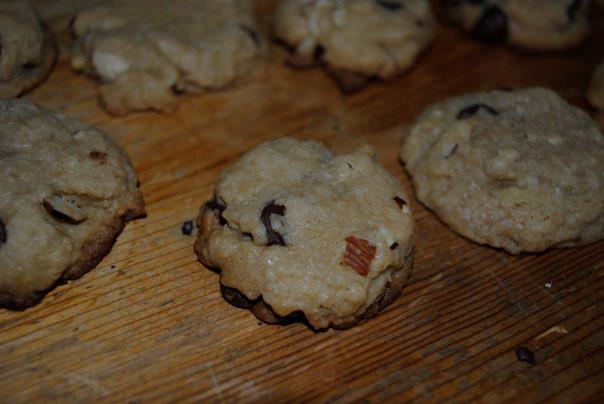 Sorry the pictures are a bit awful. I swear the cookies aren't.
My baking girl in cahoots, Nina, helped me make these cookies for the Food Blogger Great Cookie Swap 2012.
Let me start at the beginning. The cookie swap is this genius idea hosted by Love & Olive Oil and Little Kitchen that goes like this: there are a ton of people who love to bake and who do it pretty well. These people love to eat and they love to feed others. How about we start a swap where once a year we connect these people and they can send each other cookies? In boxes? Using the postal service! (Well, at least that's how I imagine the idea came about. I dunno.) It makes a lot of sense, and even more once you start receiving cookies from across the country and they are so. Good. Because we bloggers want to impress each other so we go all out. Everyone sends one dozen cookies each to three people, and in return receives a dozen each from three different people. I got pumpkin-filled gingersnaps, double chocolate cherry, and chai-spiced gingerbread men. So. Happy.
I've been looking forward to doing this swap since last year, when I found out about it after the recipes from the 2011 swap were posted and I wished I had known about it a month before so I could participate. When I was finally sent my matches this year, I began to think: what cookie could I really knock 'em out with? Then I began to think about Rubyzaar. In New York City, we love a good flea market. Even more than a flea market, we love us a bazaar. Sounds like some exotic, very limited-edition, one-of-a-kind, locally sourced goodness. Where am I going here? The Union Square Holiday Market. 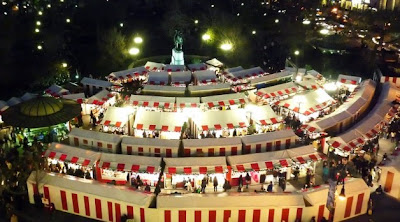 Once a year, UrbanSpace sets up red and white tents all over the until-recently-occupied-by-Occupiers space we all go to on Friday night. By we, I mean every nyc-public-high-schooler, and then some. I often take out-of-towners my age here, because it has so many amusements and it is so nearby many other cool neighborhoods: St. Mark's Place and the Lower East Side, Soho, Bryant Park (ice-skating in the winter!). Acually, Bryant park isn't so nearby. But it isn't too far away either. Nor is Chinatown, or the Theater and Fashion Districts. Each neighborhood leads to the next, and if you're with me, then you end up walking a lot before you know it, because there's this little place that sells only pudding ten blocks over, and just a couple blocks more, and we can go to this tiny spot that sells only belgian fries and, like, 50 dipping sauces! Oh, and there's that awesome dumpling place a couple avenues up! I like to think that all that walking burns off the food, but we all know it's a lie.
But I digress. So, for about a month in early winter, the Holiday Market sets up in union square and is filled with people selling scarves, puppets, hot chocolate, and these weird hand warmer pads that turn soft and warm from this electromagnetic shock thing. Actually pretty cool. And among the vendors are tucked many food places, the ins and outs of which I know quite intimately at this point. Every year, I wait for Rubyzaar. Rubyzaar is a clothing store actually, but once a year for the holiday market, they rent a big kitchen space and become Rubyzaar baked, and make really, really amazing cookies. Not only are they great and exotic (they reflect the different places Rubyzaar designers have been for their clothes) but they are rendered extra-special because they are only available once a year. But here's my sneaky bit: I found their menu online. And from those delicious descriptions, I figured I could make the cookies myself. So for the Cookie Swap, that's where I turned. 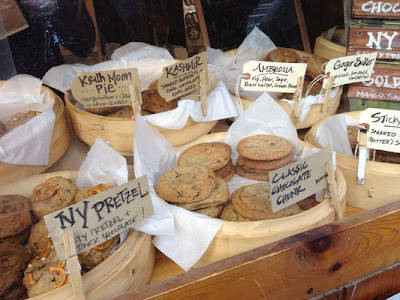 See in the middle, the ones called Kashmir? Like the Led Zep song? My favorite. Rubyzaar describes them as "smoked almonds, earl grey, + dark chocolate". I decided these would be The Chosen Ones. So how to get the earl grey flavor in? I've done some experimenting before (chai flavor abounds on this blog) but never gotten truly satisfactory results. Then I remembered a very intriguing post on the Cupcake Project about using butter to infuse tea flavor into baked goods. Bingo. 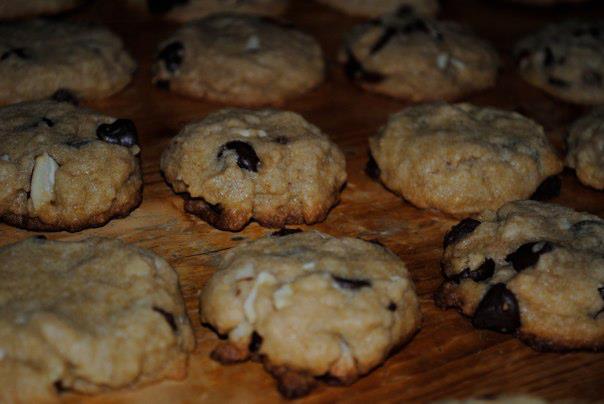 The rest was simple. Using a chocolate chip cookie recipe that called for melted butter, to a floury bowl poured some incredibly fragrant earl-grey golden liquid, some chopped almonds, and some dark chocolate, mixed, and baked. They were very, very good. We made them in Nina's house, and her parents were nearly dying because they couldn't eat the cookies. Luckily, we made enough that once we packaged and sent off three dozen, there was still a dozen and a half for my family and the same amount for her. My father was not as much a fan. "They're a little... weird," he said, "like really nice scented soap." Whatever. If you don't like bergamot, they're not for you. I ate a lot of them. 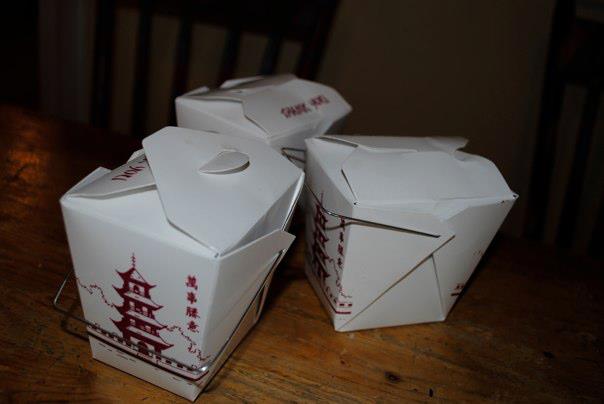 Lastly, we put a bit of New York touch into the packaging that I'm proud of. We went down the street, stopped into the nearest Chinese takeout place, and acquired three takeout boxes. We stuffed the cookies into these and then cushioned the boxes with crumpled New York Times business section. I hope my bloggers in Texas and Kansas appreciated that bit! 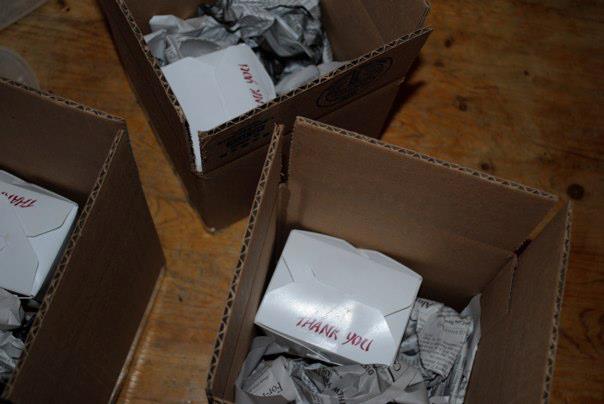 Oh, and a last note? You have a lot of leftover butter soaked tea leaves when you finish this recipe. Let them dry overnight, then crumble them with granulated sugar and you have earl-grey sugar. I'm not too sure what to do with it, but it sure looks fancy! Probably a good thing to put in a jar, tie with a bow, and give as a holiday gift.

Preheat the oven to 325 ºF (165 ºC). Grease cookie sheets or line with parchment paper.
Mix together flour, baking soda and salt and set aside.
If tea is in teabags, remove it so that it is loose. In a small saucepan, melt the butter until just liquid, then add the tea leaves. Heat on low for about 5 minutes, or until butter darkens and there is a buttery tea smell pervading the kitchen. Remove from heat and let sit for at least 5 minutes, then strain through fine mesh. Don't worry if a couple tea pieces slip through. You will now have less butter than what you started with. Depending on how much less, you may want to add some milk to the dough later.

In a medium bowl, stir the melted butter, brown sugar and white sugar until all is liquid. Beat in the vanilla, egg, and egg yolk until mixture lightens. Mix in the dry ingredients until just blended. At this point, of the dough is too dry and won't come together, add a couple tablespoons of milk. Stir in the chocolate chips and almonds.
Drop cookie dough onto the prepared cookie sheets. They don't spread much so if you'd like them flatter rather than mounded, press each cookie gently down.
Bake for 15 to 17 minutes in the preheated oven, or until firm but not brittle. Can be stored in an airtight container for up to one week. 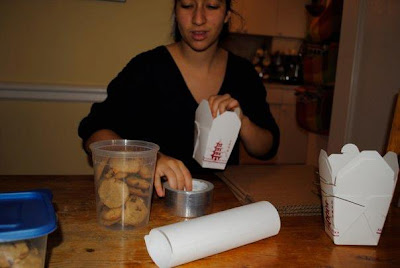 Bonus picture! Here's a bad one of me, packing everything up with my signature silver duct tape. Because I know you're curious :)
Posted by Lola Bellybutton at 2:50 PM