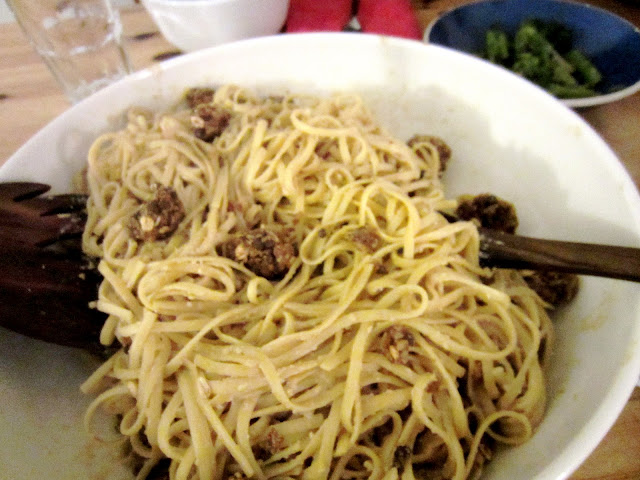 Dammit these photos suck. My constant plight: do I make the food and then spend hours getting the right shot? Or do I eat it while it's still hot, in the company of friends, and bad lighting? Certainly for this meal I went with the latter. 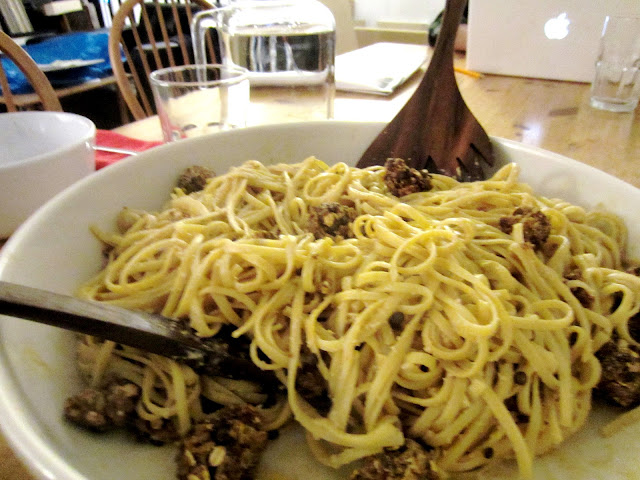 I'm not vegan, but there is something I absolutely love about making something when you have restrictions. I had vegan friend for dinner, so I went all out. We made some kale salad, too, and had homemade peanut-butter cups for dessert (just buy vegan chocolate). The crowning glory was this pasta dish. The alfredo gains its creaminess largely from cashews, which are often substituted in place of dairy. The meatballs were fabulous. They benefited from putting a whole lot of flavors in. The great thing about vegan food is there's often a lot less cooking. The alfredo is raw: all you have to do is put everything in the blender! And the balls you just mix together, form, and bake. It was a really great meal. The one thing I would warn is don't go into this looking for the glory or taste of traditional, mother's alfredo or meatballs. It's a beast of its own accord.

for meatballs
(note: sorry I haven't added in instructions for the lentil and brown rice! I'm a bit of a freak and I often have them leftover in my fridge and I'm too lazy to add cooking instructions right now. Neither should take too long though, especially if you use a pressure cooker.)

Preheat oven to 300 F.
Mix all ingredients together in a bowl. If mixture isn't sticking enough, add a little water.
Measure out 2 tablespoons of mixture for each meatball if you want them big, or 1 if you want them mini (like I did) and roll into a ball with your hands.
Spray cooking sheet and place meatballs on it. Place into oven and cook 15 minutes on one side and roll over and cook 15 minutes on the other side.
After they are out of the oven, let stand for about 10 minutes to allow them to firm up. They may crumble a bit, but that's ok. They still taste great in bits.

Add all the ingredients to a blender and blend until smooth. Strain if you want really smooth, but I personally like the crunchy cashew bits. Adjust flavoring as you see fit.

Cook pasta in boiling water until al dente, 8-10 minutes (or whatever the box says) and drain.

Posted by Lola Bellybutton at 8:59 AM