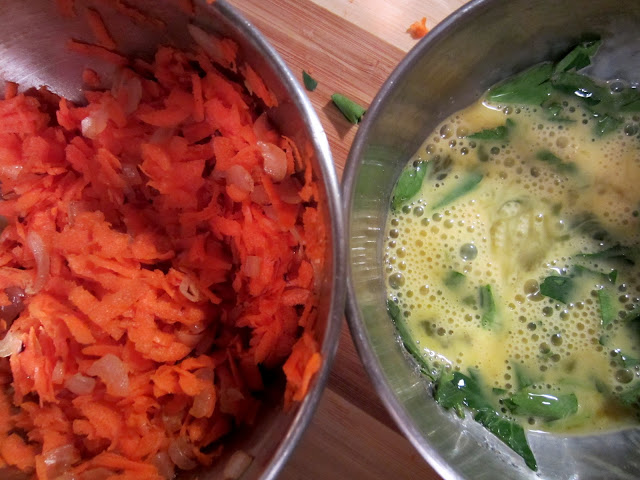 These were originally called carrot tortillas, but that seems misleading to one who grew up in a culture that knows tortilla only as a corn or flour pancake. Actually, that's the mexican definition. In Spanish cooking, a tortilla is an omelet stuffed to bursting with vegetables. That's what this is. And, like any good american, I changed the name up a bit. For its own good. 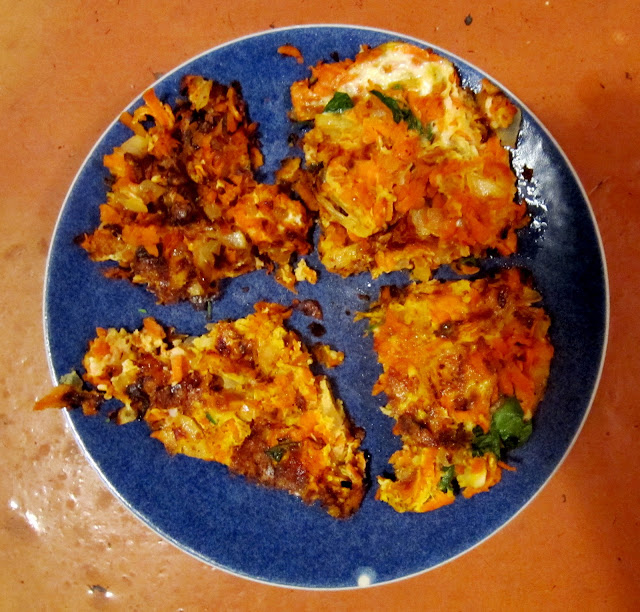 This griddlecake carrot cake, carrot pancake thing needs to be appreciated. So what if it's name is a little hard to choose? It's the most delicious thing to put on your plate for lunch or dinner. And it's easy to make in single servings. It's funny, because cooking carrot into things does not play a big part American cooking, yet it's sweet and crunchy and even crispy and so great with onion. It's kind of like potato latkes, but spanish. This is a fragile, falling apart meal that's best with ketchup unrepentantly slathered over it. No knife needed.

Heat 1 tbsp of oil in a medium nonstick skillet over medium high heat.

Add the onion and sautee for 5-8 minutes.
Combine the grated carrot and onion in a small bowl.
In a separate bowl mix the eggs with the milk, parsley, salt, and pepper, and beat with a fork for 30 seconds until foamy.

Using the same pan, heat the other tbsp oil over medium heat.
Squeeze the carrot and onion mixture gently with a paper towel to remove excess moisture that will make the cake soggy, and add to the pan.
Flatten it so as to cover the entire skillet evenly, adding at once the egg mixture and allow to cover the carrots evenly, shaking the pan a little.
Cook the tortilla over medium heat for about 15 minutes.
When the center is cooked flip the cake (which can be done with the help of a plate to invert it and place back on the pan) and let it brown on the other side about 3 minutes more.
Serve warm with more parsley as garnish, if desired.
Posted by Lola Bellybutton at 10:54 PM